The Safest Planes to Fly in, by Accident Statistics

Flying is one of the safest means of transport. It also gets safer every year. Some airplane manufacturers have even succeeded to build models which have not yet had a single fatality. In this article we will analyze the accident record from planes produced by the following manufacturers:

The accident data is taken from the Aviation Safety Network, a leading reference organization in this topic. We only consider planes built after 1969, when the iconic Boeing 747 was introduced, and only those for which more than 50 units were built.

We have included the models from De Havilland Canada (DHC) with Bombardier, since DHC was bought by Bombardier in 1992. 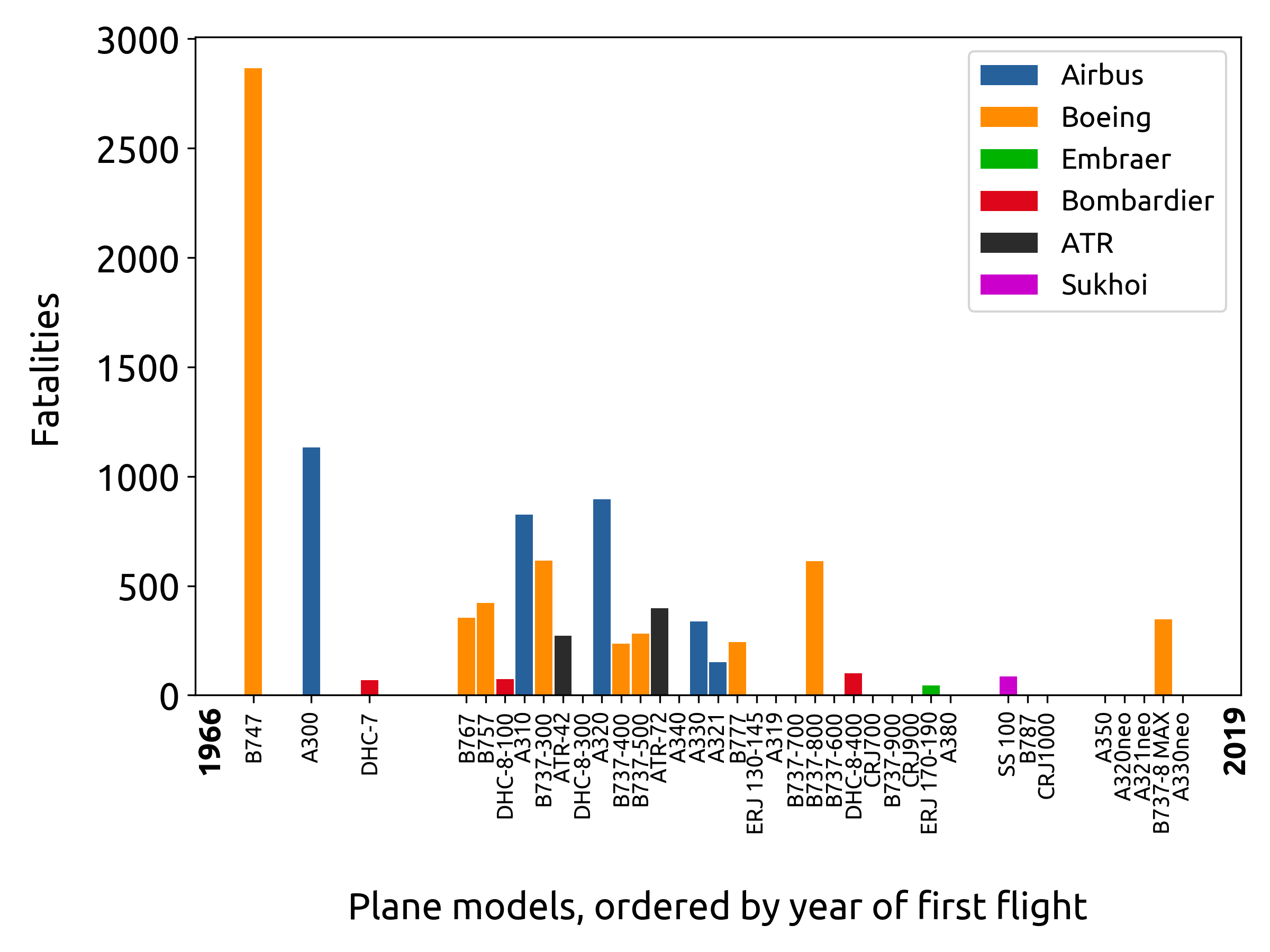 First let’s take a look at the total number of fatalities per model. The general trend seems to be that older models have more fatalities than newer ones, which in many cases show zero fatalities.

The recent Boeing 737-8 MAX is an exception in this trend. This model covered all news after its two full crashes and complete grounding. Regional jet manufacturers such as Bombardier, ATR and Embraer show lower number of fatalities than Boeing and Airbus. 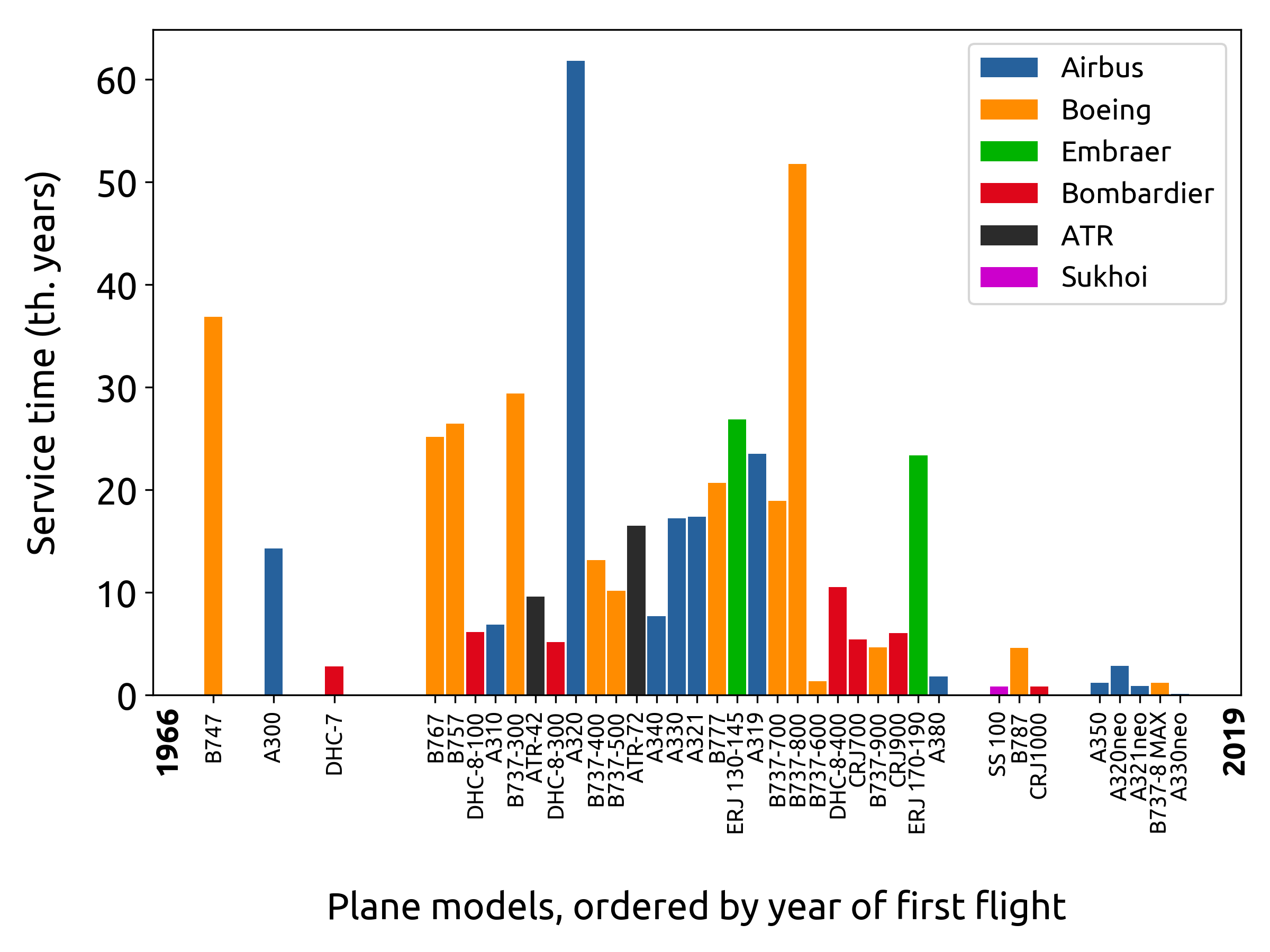 Older plane models might have a higher accident record that the newer ones. This doesn’t make them more dangerous. It is just that they have been flying for longer time, and therefore encountered more situations where accidents can happen.

To account for this, the service time of each model was computed based on how many deliveries it had each year and assuming a maximum lifespan of 27 years for each plane. For example, up to now, about 1500 Boeing 747 have been produced, from which 430 are still in operation. This gives a total service time of about 35000 years.

As we can see in the figure above, the models with highest service time are the well-known Airbus 320 and the Boeing 737 family, mainly the 737-800. The Embraers are also quite high, given their massive use in regional airlines for short-range flights. Newer models such as the Airbus 350 have also been produced at a large scale, but given the low age of their fleet, the total service time becomes quite small. 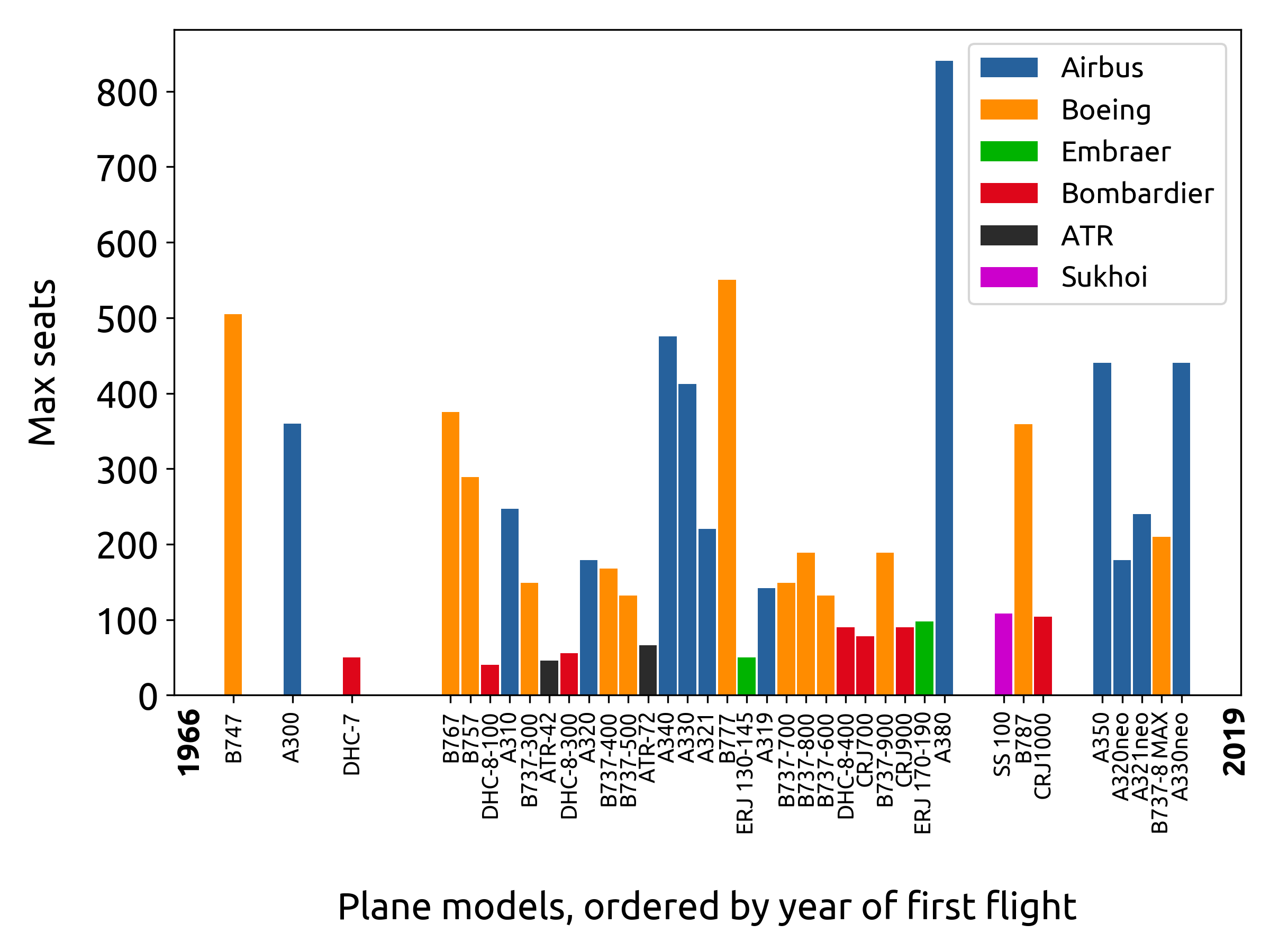 The safety of a model should therefore consider the its seating capacity. In the figure above we can see the maximum number of passengers that each plane model can fit. That is, assuming that all the seating space is allocated to the economy class. The Airbus 380 is the clear winner here, allowing up to 840 seats. Embraer, Bombardier and ATR all fall below 100, since these companies are mostly oriented to regional flights.

In reality, most planes split the seating area into first, business and economy classes, leading to a lower seat number as the one shown here. But for the purpose of comparison, the important thing is to use the same assumption on seat spacing for all the models. 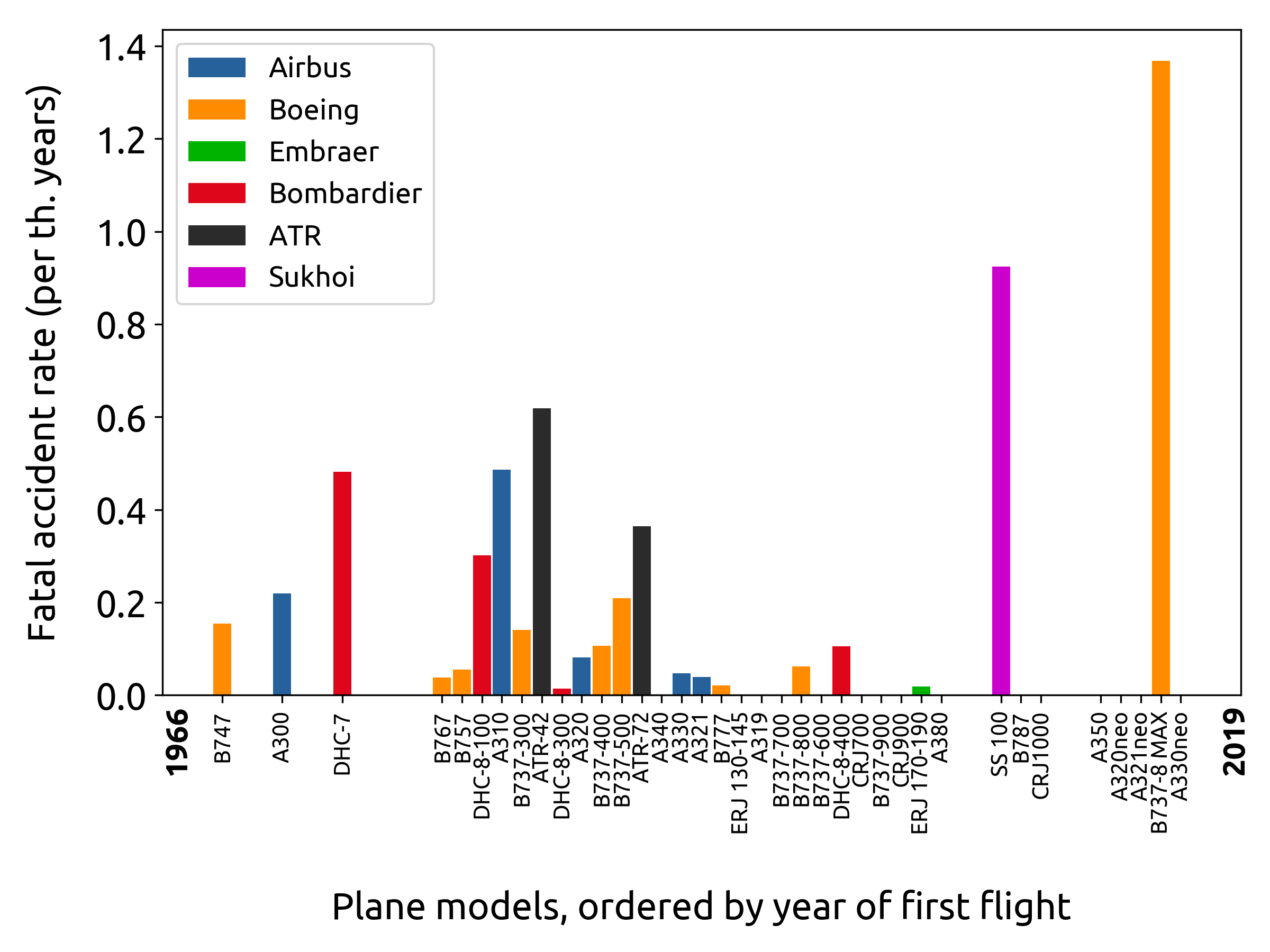 The metric used here to compare the safety of different models is as follows: fatalities divided by number of seats and by the service time. This can be regarded as the rate of fatal accidents for each model. That is, how often a fatal accident is expected to occur.

The first thing we can see is the spike on the Boeing 737-8 MAX is much higher than in the first figure showing fatalities alone. This is a direct result of being a model with very small service time and high fatality record. On the other hand, the Boeing 747 becomes a much safer model than initially expected.

We also saw that the fatalities of the ATR models are relatively small, but given their small seating space, those numbers represent a very large fatal accident rate. The ATR-42 is actually one of the least safe models of the analyzed here.

The massively produced Airbus 320 and Boeing 737-800 have a very low fatal accident record. Given the large service time of these models, its safe to say that they have encountered many challenging situations, and it looks that they managed to overcome almost all.

Sukhoi has been producing war planes since 1939, but it was only in 2007 that it entered commercial aviation with the SS 100. This model has been involved in two fatal accidents which give it high accident rate. One was during an demonstration flight in Jakarta and the other during an emergency landing in Moscow.

Unlike the Boeing 737-8 MAX, the SS 100 accidents were not due to a design flaw of the plane, but to inadequate communication between the plane and tower and high wind shear due to a large Cumulonimbus cloud. Therefore, longer service times might give the Sukhoi a better safety record. 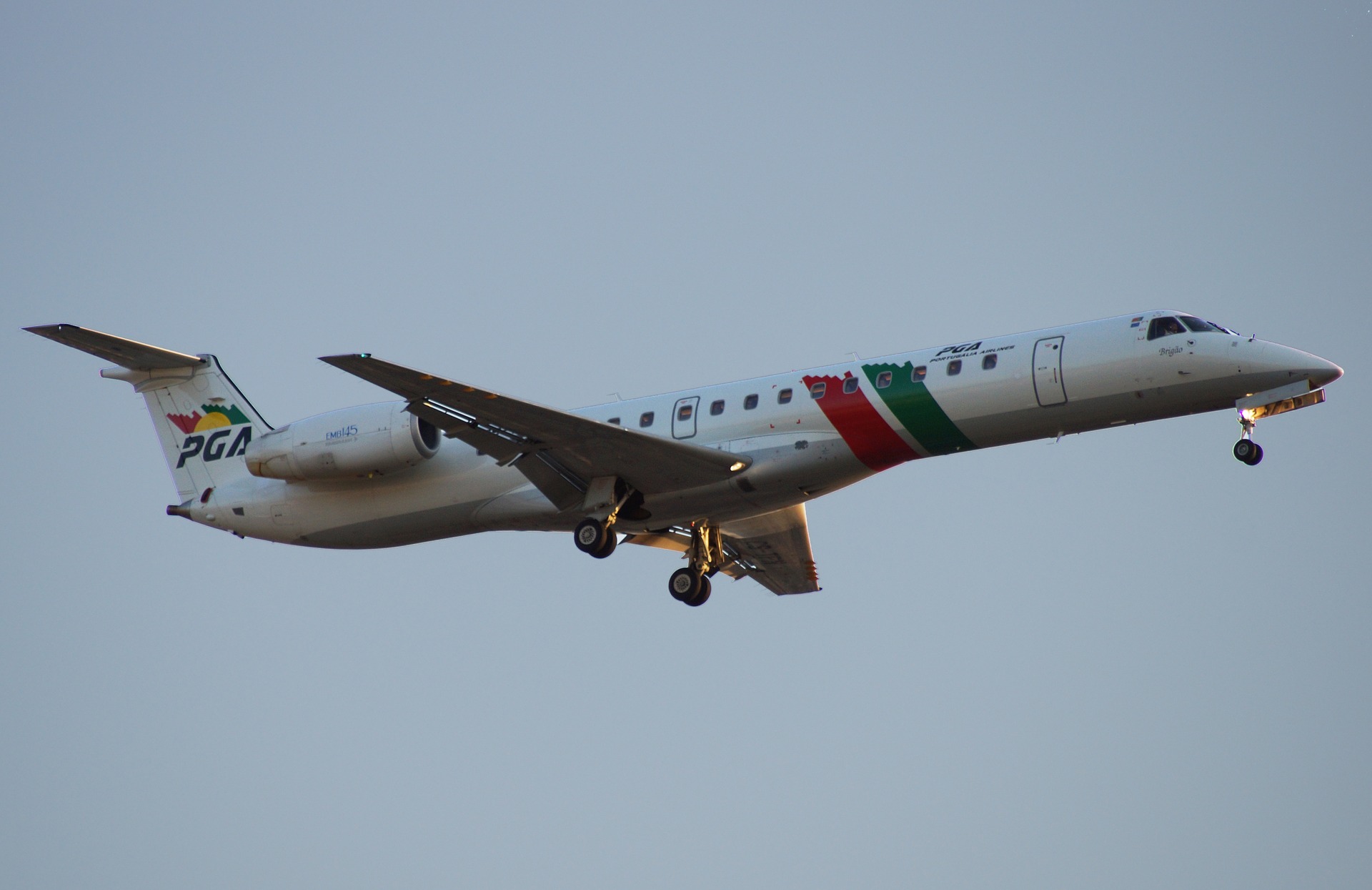 An Embraer ERJ-145, with its rear-mounted jets and pointy nose.

The oldest model showing zero fatalities is the Airbus 340. This model also handles turbulence very well, since, as we covered in our article on the best planes for turbulence, the Airbus 340 appeared as number 2 in our list. The problem is that the service time of this model is not as large as “only” 380 planes have been built. So, statistically speaking, it has not encountered as many dangerous situations as others models had to deal with.

This is why our next top choice of safest plane is the Embraer ERJ family 130/140/145. With a much larger service time than the Airbus 340 due to over 1200 models built, it still shows zero fatalities during all its operation. 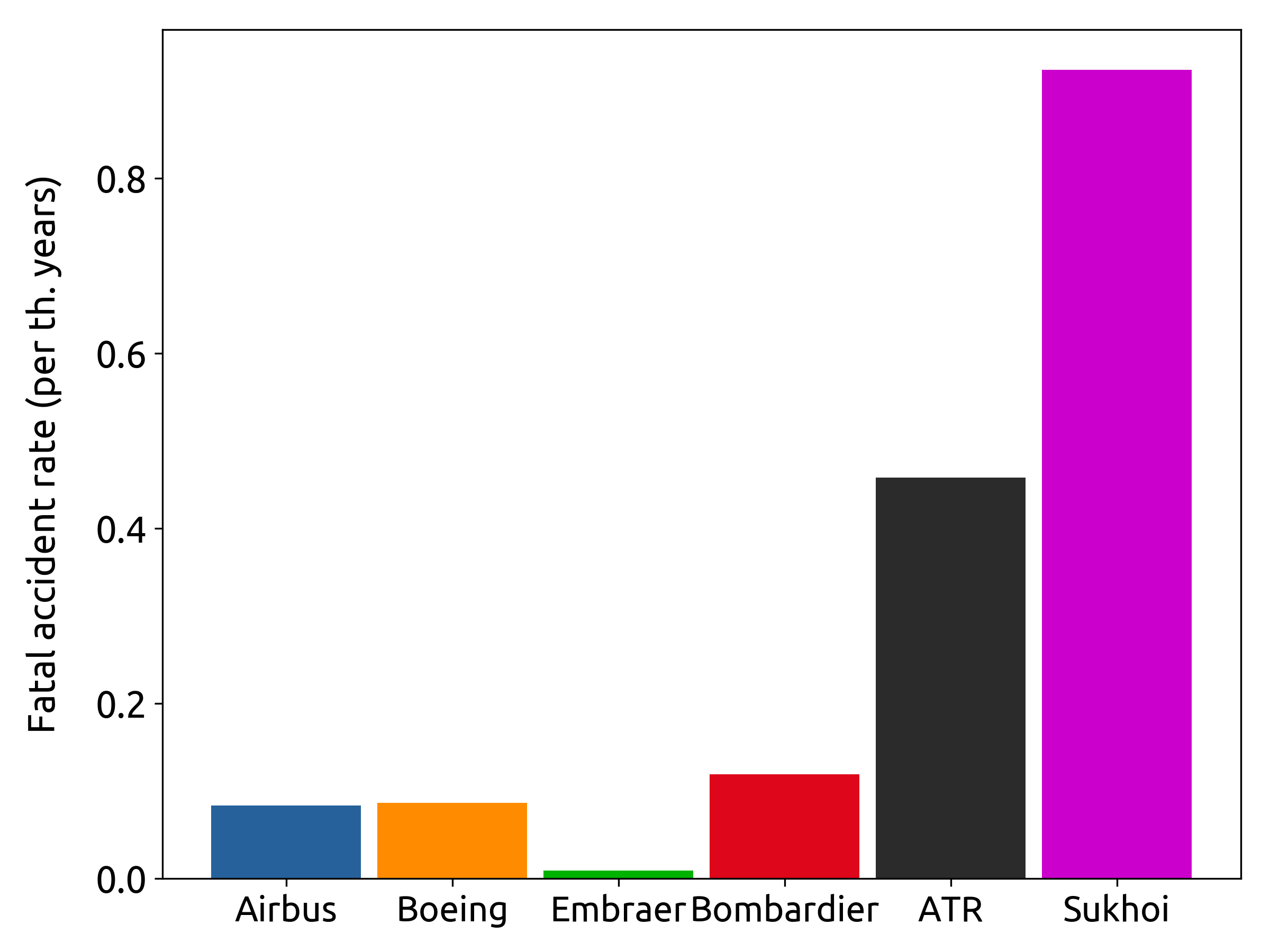 Comparison between the different manufacturers shows that Embraer is the clear winner: just 0.01 fatal accidents every thousand years of service time. The rate for the ATR family is about 50 times higher and of Sukhoi 90 times higher, making them the least safe manufacturers analyzed here.

For Airbus, Boeing and Bombardier, the differences are almost negligible. So they can be considered equally safe. 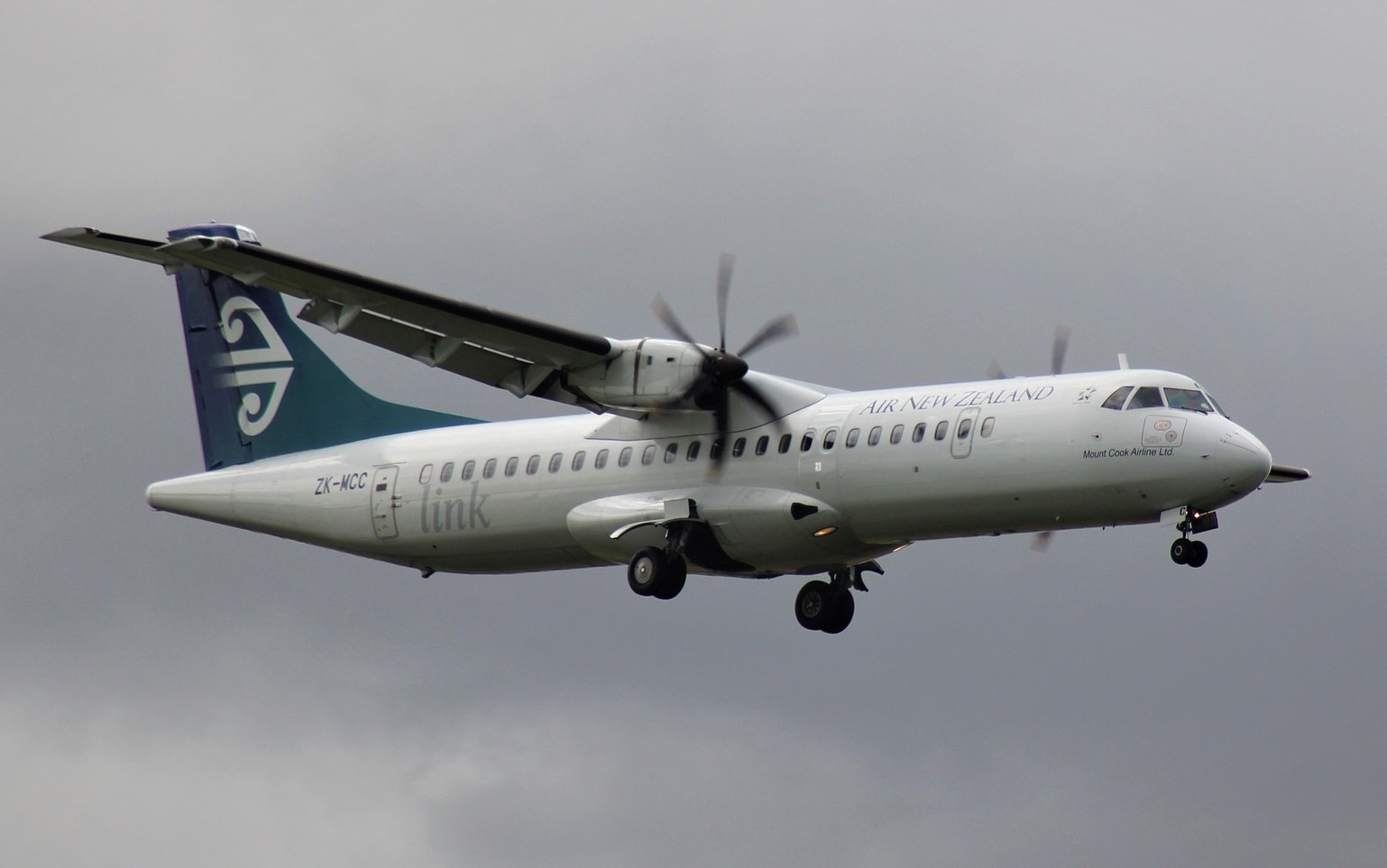 An ATR 72 with its propeller engines

The accidents of the ATR vary widely, from adverse weather to malfunctioning of the flight control system or inadequate pilot training. The latest accidents date from 2015 and 2010.

Since the Boeing 247 in 1933, the aviation industry has advanced substantially in the design and safety of the models. Up to now, the models can be roughly separated into four generations. In this article we have only shown planes from Generation 3 and 4. 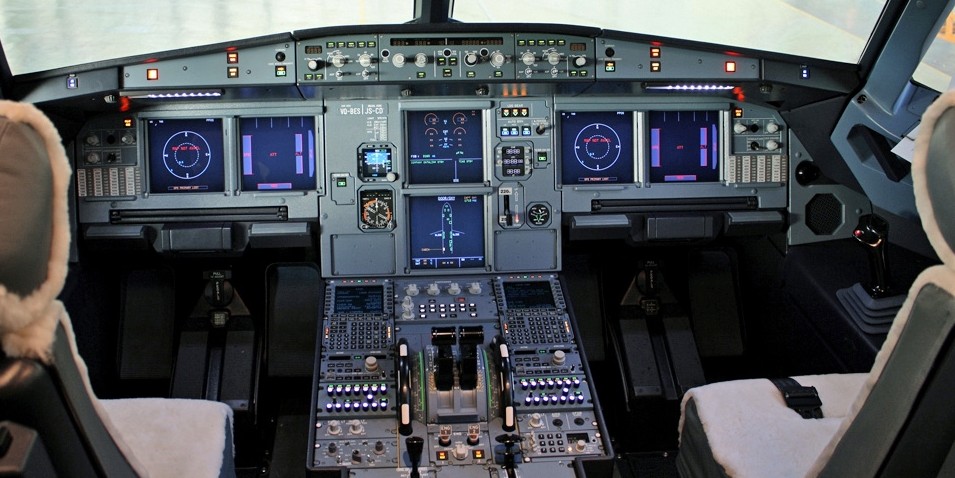 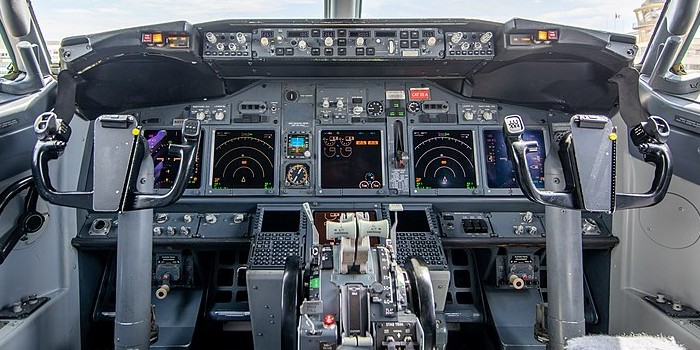 Generation 3 planes such as the Boeing 747-400 are known as “glass cockpit”, since they introduced electronic equipment to monitor the altitude, speed and other flight variables. Previously this was done with mechanical systems which were more prone to malfunctioning.

Generation 4 planes went a step further, into what is known as “fly-by-wire”. Here the pilot does not control the movement of the different parts of the wing directly. Instead, he enters the desired maneuver to a computer, and this one adjusts the wings and tail automatically. Generation 4 planes don’t even have a yoke (steering wheel), just a side stick and a display where the pilot should enter its commands.

Airbus was the first manufacturer to implement this system in their Airbus 320 in 1986. Boeing introduced it in 1995 for the first time in their 777 model.

Fly-by-wire has long been considered to reduce human error and increase the safety of flying. But the recent crashes of the Boeing 737-8 MAX have raised questions on this. These accidents occurred due to an inadequate code, which got the inadequate reading that the angle of attack was too high, and therefore the plane had to be directed down. The result was evidently wrong for the pilot, which constantly tried to re-direct the plane upwards. But this risk was “invisible” to the fly-by-wire system.

The takeaway is that, yes, fly-by-wire brings enormous help on flight control and safety. But at the end of the day, it should be pilot the one in charge of the final decision and with the possibility to override any command from the main computer. 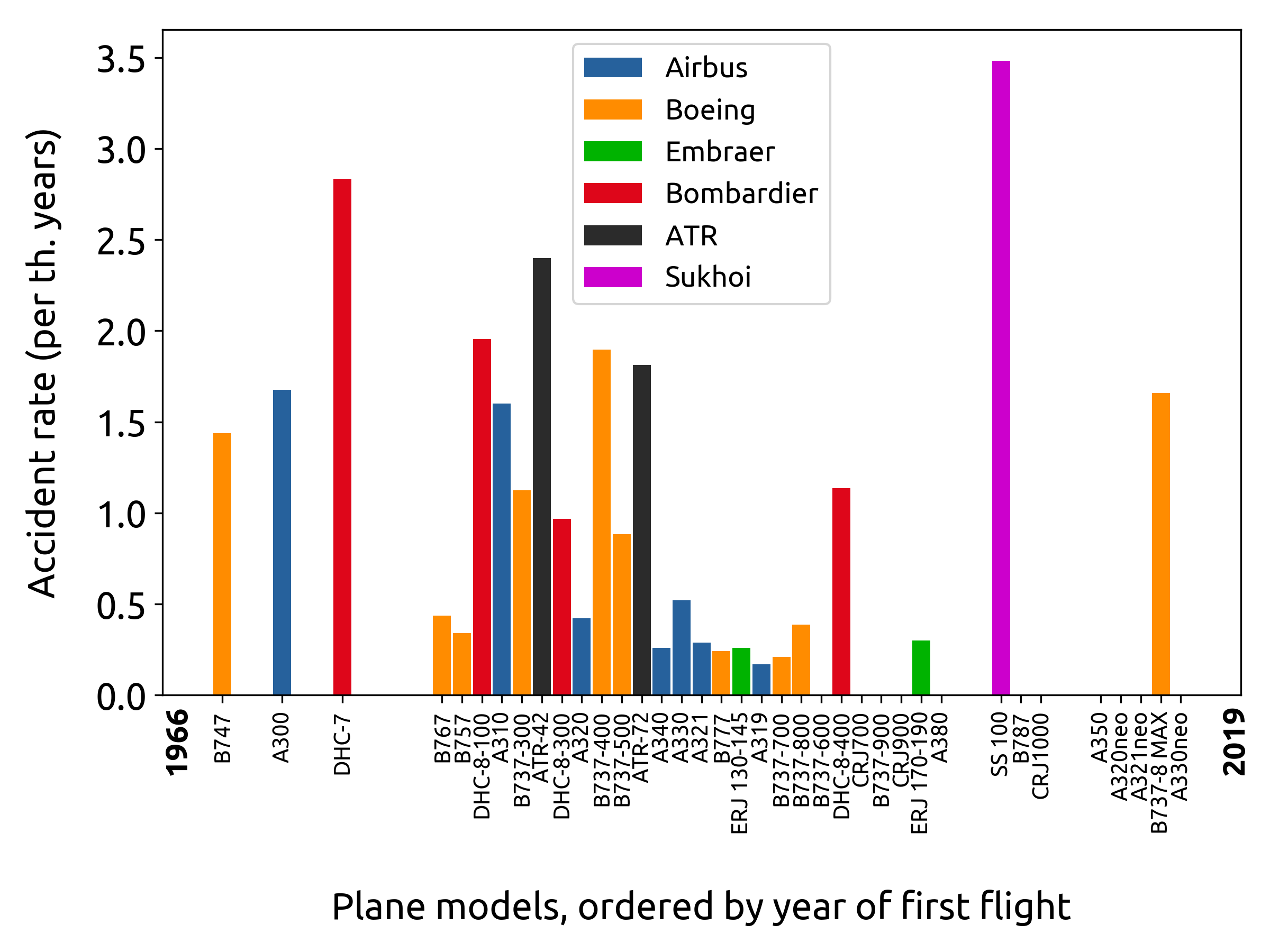 Other accident statistics might also show what is known as “hull-losses”: the damage of a plane beyond economically feasible repair. This variable is also useful to assess the safety of an aircraft in terms of risk for the passengers. However, hull-loss accidents are non-fatal in many cases, since they usually occur during test flights or heavy landings, where the landing gear collapses and makes the body of the plane hit the floor.

The total accident rate (fatal and non-fatal) shows a similar distribution as the fatal one alone. That is, high values for ATR and Sukhoi models, and very low for the Embraer. What is remarkable is that none of the Bombardier CRJ models have had a single accident during their service time. The Bombardier DHC models show more accidents, but these model were initially developed by De Havilland Canada, which was then bought by Bombardier. If it wasn't for this purchase, Bombardier would be the safest manufacturer of all analyzed here.